The Parties Are Over

One of the most difficult concepts I try to get across to people who are still heavily invested in voting, is to stop fueling the political machine. Here we are in April of 2015 and everyone's declaring they are running for office. Hillary and Jeb and Chris Christie. Isn't it great? Look at all the choices we have.... actually we don't. They are all the same.

If you ever had a hope that we still had a choice and that our political process isn't broken, well George Bush and his criminal administration hijacked that in 2000. Don't you ever wonder why Gore just gave up? Probably not.
Then we had hope and change Obama. Sigh... even John Stewart from the Daily Show called that "heartbreaking" It’s generally heartbreaking – that’s what the gig is.” If that's what the 'gig" is, we need a new "gig"

Almost every person I know, doesn't vote. Most of them never have. I can't blame them. I did talk to a woman on Friday, who clearly was invested in Hillary Clinton and can't wait to vote for her, she got all irate with me, because I had the nerve to call Hillary; "Nixon in a pantsuit." She was probably 70 years old. When I talk to others who don't vote or just don't care about politics they laugh at that Hillary joke.
I don't know anyone who's life has turned around for the better, as a result of voting. For me, the economy is unchanged.The housing market still sucks. Everyone I know is still struggling.
Billions of dollars will be spent on this election, all I read about is Chris Christie saying Social Security is broke and he can fix it by making everyone work till their 69 years old. After Destroying His State's Retirement System, Christie Sets His Sights On Social Security | ThinkProgress
Yeah, Christie has worked wonders here in New Jersey,  Another downgrade for NJ's credit rating
Rand Paul (#CantStandRand) is worried about "radical Islam"most people are more worried they'll be shot in the back by a domestic policeman than terrorism. Jeb Bush is supposed to be "the smart one" maybe he is since he's being advised by Karl Rove and his cronies. He has all the defense contractors behind him and the Saudi's, he's ready to go to war with Iran the way his daddy and brother made war with Iraq.
When all you have to choose from are people that have not done one thing to improve Americans lives while they've been in office and you're expected to believe that their behavior will magically change once they become president, that's delusional. It's a fantasy, if you want fantasy, go to Disneyworld. I am not voting for these fakes anymore. I will not support the colossal waste of money this election will bring on. Millions of Americans need help, their quality of life is slowly degrading, none of these politicians are going to do anything about it. The only thing that you can be sure of is that corporate welfare will be the order of the day, but welfare for struggling Americans will continue to be demonized. Our bloated military budget will grow, while we have to privatize Social Security until it's just gone. Nobody cares. Until people decide to throw off this yoke of unjust oppression, we will continue on this journey of a race to the bottom. 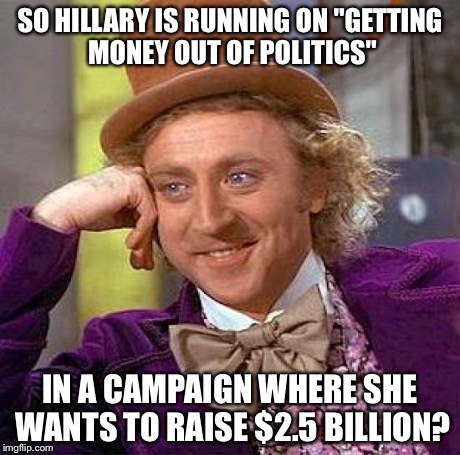 I hope you all had a nice Easter or Equinox, whatever you celebrate. It looks like Hillary Clinton is celebrating too, because she's running for president.
Seriously.
All you can really do is shake your head when all that's out there are a bunch of family members related to other family members, running for office in order to employ other family members. Like any woman, I would love to see a woman become president. But Hillary is the last person I would vote for. Please Hillary, just don't bother.
Jeb Bush, Rand Paul, Hillary Clinton. Then you have Ted Cruz, which, where did the birthers go? He was born in Canada! It's a damn joke.
There was a lot I saw this week, between Rand Paul having a hissy fit over a reporter having the nerve to ask him a question and everyone trying to get real excited over Hillary running for office.
But the real news to me was this, Powell, citing crisis damage, says rate hikes to proceed gradually after liftoff | Reuters
"permanent damage from the crisis."
This is the first time I have seen anything or anyone put out there, that this "crises" we are surviving, could be permanent.
"If lost production, low investment and underused labor are permanent scars from the crisis," IF?
Then I see this in the NYT,
States Tighten Conditions for Receiving Food Stamps as the Economy Improves - NYTimes.com
I want to know, where is the economy improving? Not here in New Jersey it isn't. What are all these so called able bodied adults supposed to do? How are you supposed to make any sense of this disconnect where we have people saying at the FED that the economy is permanently damaged and "March non-farm payroll growth was the smallest increase since December 2013."
Happy days are here again, vote for Hillary!
I guess we are all supposed to just keep up with the charade, keep voting! You can all see the hope and change we got from President Obama, vote for Hillary! Gee we have a choice between a Bush and a Clinton, what's next a Kennedy? Are any of these people going to do anything about the gigantic unemployment problem?
Are we really supposed to believe after the criminals running the Bush administration, that the office of president means anything? We know who's running the show and it's not the person you voted for.
I guess if Hillary wins it will be better than this;
For further hilarity; Twitter Hilariously Trolls Rand Paul with #RandPaulCampaignSlogans
#Can'tStandRand
Posted by Patricia at 11:08 AM 2 comments: