The GOP is hell bent on getting this Bush appointee on the SCOTUS.
It doesn't surprise me that Kavanaugh has been accused of attempted rape. Because I bet with these ruthless people in congress and the senate, that there are quite a few rapists sitting on those chairs. They've been raping us for years.
I just have to laugh at this giant circus.
Just because Kavanaugh denies the charges doesn't mean the charges are false.
I remember what happened to Anita Hill, I was in college when that shit show went down.
Nothing matters to these psychopaths.
I wouldn't want to be an intern to any of these people. I would stay as far away from Washington D.C.as I possibly could and I grew up there.
Bill Clinton was accused of sexual assault by Juanita Broaddrick and look what happened to him. He's a billionaire and his wife aided and abetted him.
It ain't just Republicans, although the pussy grabber in chief doesn't help matters. 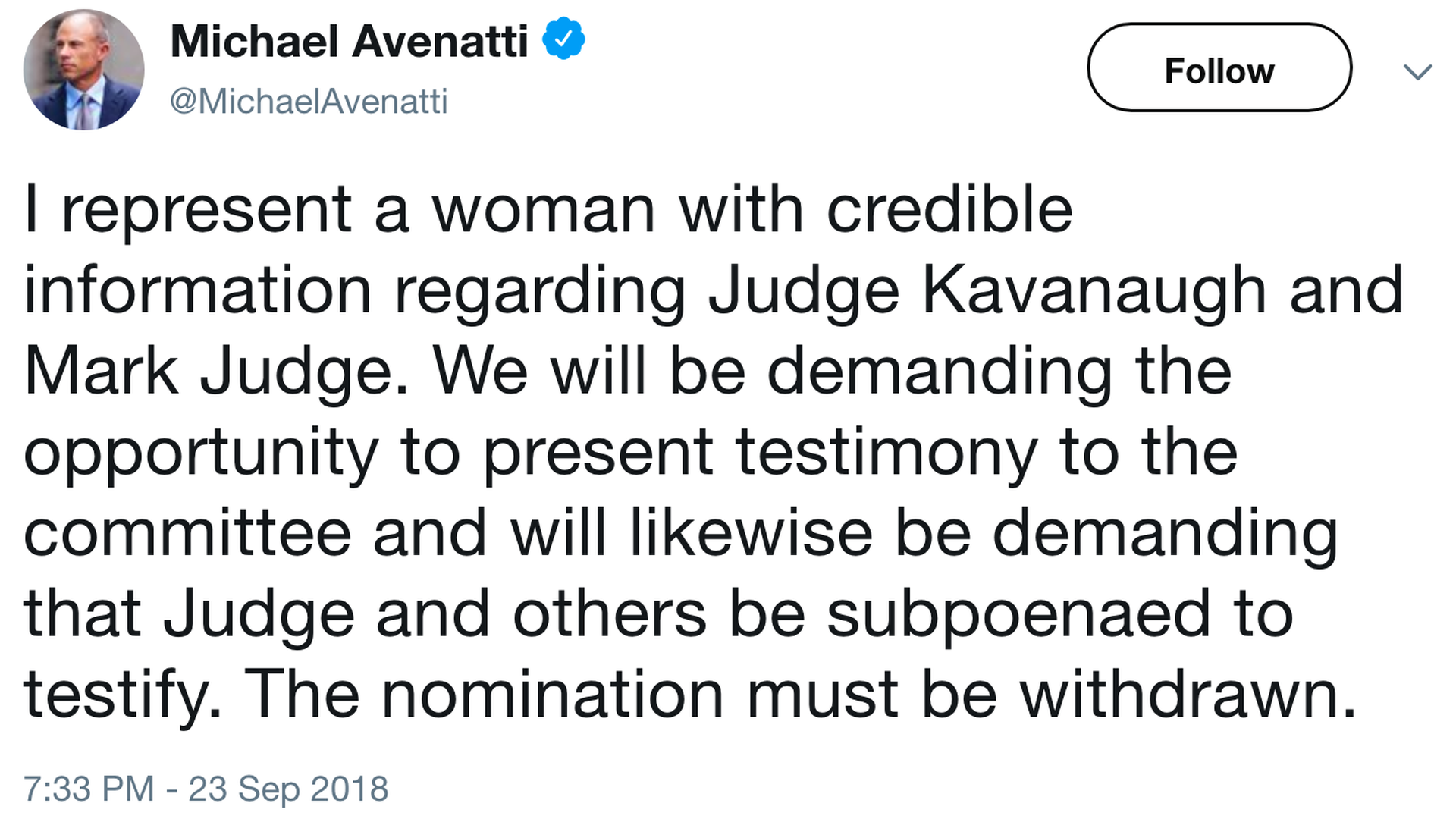 The second accuser that has come out, is being represented by Michael Avenetti. Stormy Daniel's lawyer. Everyone was calling her a liar too, but now we know she was telling the truth.
The rumor is that now Rosenstein is going to be fired over a story in The New York Times, that supposedly isn't even true. Trump will do it too, to get the investigation stalled and get people to stop looking at Kavanaugh, so they can slide him in. It's a win-win for Trump. ( It is now rumored that Rosenstein has resigned)
All of this chaos, Trump .loves, he thrives on it.
He doesn't care that everything that comes out of the White House is a giant scandal. He watches it all on TV and it's all about him and his poor choices.
I have known people just like Trump, maybe you do to. People who make really bad things happen and then bumble on and probably never pay the price. Money has always covered Trumps ass, but you get the gist. We all know these types and we know to stay far away from them.
In high school, I also knew a lot of guys like Kavanaugh. Back then, if you got in a situation like Ford did, you kept it to yourself. Because no one would believe you or they'd say you deserved it.
I am telling you, there is an epidemic of women who have been assaulted, harassed, raped, traumatized, because our culture has normalized and covered up this psychopathic behavior.
My hope is that more and more women come forward and keep up the pressure.
But then you look at this guy;

He's just going to keep on doing whatever he's told to do, along with all the others. We all know who the big ring master is too. This guy; 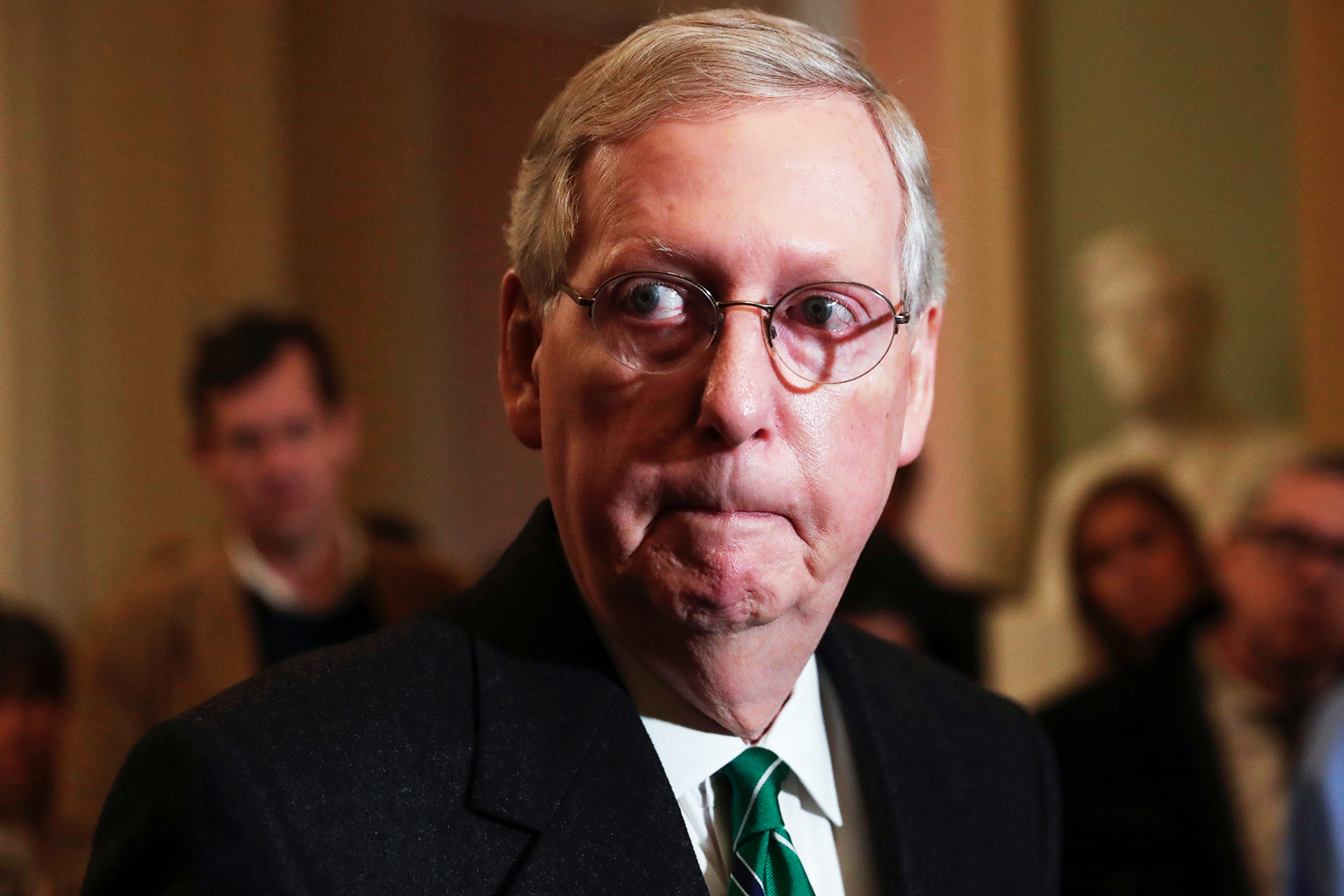 I wouldn't give these guys the time of day, yet people keep voting for these idiots, or maybe it's the gerrymandering or the voting machines. I can't explain how these knuckle draggers have been in office, 30, 40, 50 years and now look.
The entire country is nothing but a cesspool of scandal, corruption, criminals lording it over us.
I have actually had some conversations with people who don't think Kavanaugh will be approved. Especially, since the second accuser came out.
These people don't vote.
The people who voted for Trump are hiding under a rock somewhere. Probably wondering what woman, they forced themselves on at some point.
Nothing would surprise me.
I told them the only way Kavanaugh wouldn't get pushed through, is if he actually withdrew.
However, if Christine Blasey Ford's story is true, Kavanaugh has proven he has a hard time dialing back from his poor choices.
With this army of GOP and fake Democrat grandstanders, who have nothing to  lose, and kickbacks and bribes to keep them filthy rich. They have everything to gain. 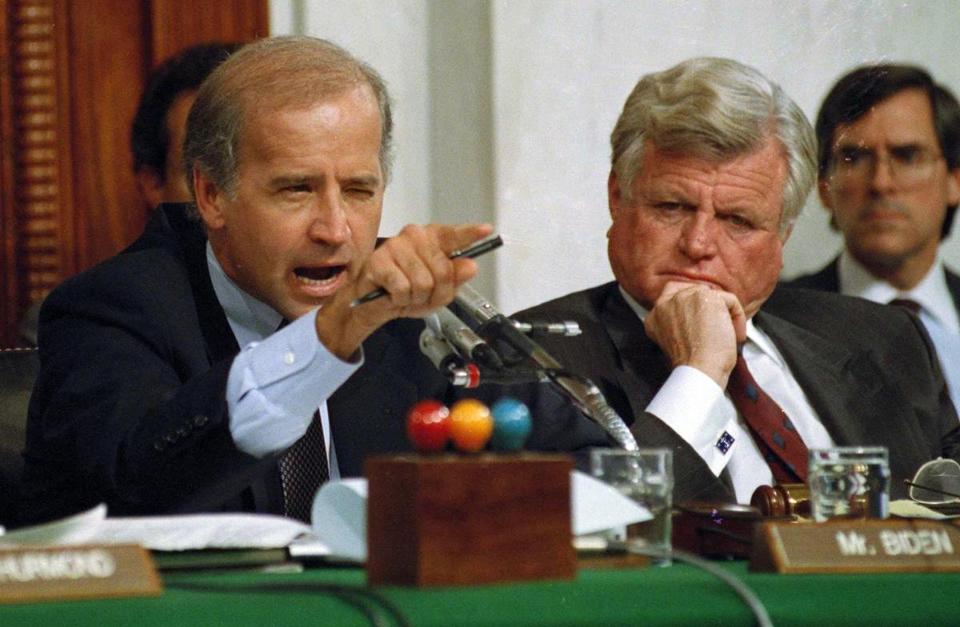 The excuse that "boys will be boys" has happened before, with Judge Thomas and the Anita Hill hearings, where Joe Biden refused to call Anita Hill's witnesses when he was Democratic co-chair.
So I am not holding my breath for anyone, especially Kavanaugh to have any sense of right or wrong, or God forbid any sense of decency or shame. It's just business as usual.
Because nothing matters anymore.
We are all being assaulted by this travesty of a SCOTUS nomination.


I was out to dinner last night, when I got a text about the NYT op-ed.
We didn't talk about it much except for  the identity of the anon was?
Who put it out there?
Twitter was trending; Lodestar@VP Pence.
Because a word Pence seems to enjoy using, was included in the op-ed.
.@VP HEY NOW, YOU'RE A #LODESTAR GET YOUR GAME ON GO PLAY HEY NOW, YOU'RE A LODESTAR WRITE THAT OP-ED GET PAID ALL THAT GLITTERS IS GOLD ONLY DESPERATE VEEPS BREAK THE MOLD
(Not my tweet, but it's funny)
Then Melania became a suspect. #FreeMelania.
Now it's Sessions. Soon it will be every damn one of them.
In the meantime, no one seems to think maybe there's has been a soft coup going on, for quite some time.
That an elected official (if he even was elected, legitimately) has been sabotaged.
All that is A-OK.
Americans have very short memories, if they have any at all.
We had a demented leader before named Ronald Reagan, who's wife and various other cabinet officials covered for him and ran the White House.
During the deranged Nixon years the same has happened.
So who in their right mind is under any illusion that we are a democracy?
Because it's clear we aren't and haven't been, for a long time.
My take on this, is that Trump was useful, as far as getting the Supreme Court stacked, now with Kavanaugh.
Trump has outlived his usefulness.
I don't think it's any accident that we were barraged with the Woodward book telling us Trump's military ministers think he's a moron and then this NYT op-ed comes out.
The stage has been set and now the circus will play out, as we watch Trump flail around.
Notice, simultaneously, an announcement was made that North Korea agreed to a third summit and wanted to denuclearize during Trumps first term.
The timing of this means, no one is sure if there will be another term now, also, it would probably be the one thing Trump was able to do, if indeed he had any influence on this at all.
Because we have no idea, when the cabal inside the White House took over and began detouring paperwork.
My whole premise is Trump is known for not reading briefings or anything, so it's doubtful he would know of any missing paperwork.
If it's not on Fox News, during his "Executive Time" (read goofing off) he probably doesn't know about it. Like every American that voted for him.
Trump will call Woodward's book fake news and the NYT op-ed, fake news.
I just call it convenient news, that now they want us to know Trump is bong controlled and we can all sleep well.
Notice, no Republican is saying anything about Trump and his "leadership skills" unless, they are on the way out.
Everyone want's something and Trump is a means to an end. Especially when it comes to ratings and the MSM.
Because really, what will be the outcome of this 'bombshell" NYT op-ed piece?
What is going to change?
We have a ridiculous, supposedly two party system and year after year, decade after decade, the rich get richer and the poor get poorer. They don't give a damn about the American people. They keep us divided voting for one party, then another, in the futile hope that something will change.
So, it's a delicious whodunnit.
Who wrote the NYT op-ed piece?
Why now? Right before the elections?
Is there a man behind the curtain?
Is this  a collapse of Trump's presidency?
Or will it just bumble on with tax cuts for the uber rich, degrading the environment, a robust military, that bankrupts the country.
IF this NYT piece is true, then there's no doubt that there is a shadow government.
It's not the resistance and it's not resisting anything.