When a cop stops you for failing to have a front license plate, expect to get shot. If a cop stops you for a seat belt violation, expect to get shot. Failure to signal will get you a trip to jail and you may never come out alive. Routine traffic stops have never been more dangerous and oddly enough after all the protests in Ferguson and Baltimore, the killing continues. The best part is? We haven't kept track of these statistics since 2009.  Eric Garner, Michael Brown, Freddie Gray, we don't know how many this has happened to. The Guardian began a project called "The Counted" the total is 664. What is so damning about this sorry part of American cop culture is that you would think, with more scrutiny, there would be some sort of training program, something being done to stop this violence before it starts, which leads me to believe it's been going on for so long and this problem is so out of control that no one knows where to start. No one even wants to start.
Where I live, cops are a great revenue stream for the township. I witness people getting pulled over right and left. The beginning and end of the month are always the worst because cops need their quotas. I'm lucky I'm a white lady, but my black friend Kirk isn't so lucky, he's always getting pulled over, for no damn reason.
There's 365 days in a year and already 664 people are dead.
Now everyone is begging for people to keep calm but the cops don't have to.
When the punishment for not having a front license plate is murder, people tend to feel upset. When the prosecutor calls this murder "senseless" and "asinine" that this police officer shouldn't even be one, well, it doesn't take an algebra major to equate that there's probably thousands more murderers in uniforms pulling people over when their trigger finger feels a little itchy. Worst of all this cop was wearing a cam and it didn't do anything to curtail his murderous nature. Thank God he was wearing one, however, just because there was an indictment doesn't mean there will be a conviction.
In the words of Mr. DuBose in the video, "I didn't even do nothing" doesn't matter, he didn't have a front license plate. I hope my friend Kirk does, he could easily be next.

Good to know, but that didn't stop Mr. Tensing from killing a man, I would really like to know how many of the people these cops murder had a weapon? I am guessing none, or close to none. In that case we should stop arming police officers. But nooo, we can't have that thanks to our insane gun culture. Unwarranted killings will continue and "The Counted" death toll will continue to rise.
Posted by Patricia at 7:26 PM 3 comments:

Brother Can You Spare A Non-Profit Foundation?

I work in a company, a company where the Vice President sleeps in his office with the door open on almost a daily basis. People have taken pictures of him doing it too. His brother started this company, where he has installed many inept family members. They pay people poorly, but not the family members. Family members and other family favorites get big Christmas bonuses, but not the rest of the employees. We are all under surveillance on the floor, we are being watched so we're not sleeping on the job. Kind of ironic, don'tcha think? In a dynastic company, such as mine, I see many things that look like the American political system. In my company the managers are told they have to work x amount of hours. The manager in charge of the schedule prints it out and gets it approved by the head manager. After it's approved to what she's been told she has to work, she whites out whats been written and writes in what she wants her schedule to be, she leaves 15 minutes early every day and since she is salaried, she manages to get paid for the hours she doesn't work. The schedule is an illusion. It doesn't mean anything. Just like the words politicians say, doesn't mean a thing. Like a congress that only works 126 days a year, while the rest of us are damn near working all 365 days.

The Clinton's are an example, they have a foundation, called the Clinton Foundation, where they employ their daughter, Chelsea, the CEO is Donna Shalala, anyone remember her?  She was the Secretary of Health and Human Services, under President Clinton and Bush. This is a non-profit foundation, that's a job creator for friends or family. It is taken for granted that this kind of nepotism and cronyism occurs and it will continue to occur. Just  like in my company where many family members and friends of family are employed, it doesn't mean you are getting the sharpest knife in the drawer, You just get the easiest most convenient employee. Which is why my company will soon be going out of business because they've run it into the ground with their brand of stupid.
Speaking of stupid, lets look at another dynasty, Jeb Bush, surprise! He's got a non-profit too, the Foundation For Excellence in Education, I guess his idiot brother really affected him, but I digress.
Guess who's the Board Chair? None other than WMD liar Condoleeza Rice. Ya know, maybe she is one of the reasons why, he made that statement, even knowing what we know now, he still would have invaded Iraq and Hillary would too, nice touch there. Also Jebs daughter Noelle was busted for crack, spent 2 weeks in jail and works for one of her daddy's businesses. Lucky for her, because people aren't in the habit of hiring those who have been arrested on drug charges. Kind of like in my company, the Vice President's son was arrested for dealing narcotics, but he's got a golden parachute when he gets out of jail and so it goes.

The economy is very bad, but not for the 1% with "non-profit" foundations, with all kinds of behind-the-scenes shenanigans going on, just like at my dynastic company where the relatives are treated like gold and everyone else is treated like garbage, which is why I refuse to tie my self to any one employer, it's why I refuse to vote anymore. These people have it made, they rake in the tax free cash and hand out positions to their kids and friends while the rest of us just scrape along. This system will not change and no amount of voting will change it. The economy will continue degrade, but insulated politicians and their kids won't ever have to worry about that. Go ahead and vote for these selfish, corrupt candidates. They probably fall asleep in their chairs at the office with the door open too.

Posted by Patricia at 2:03 PM No comments: 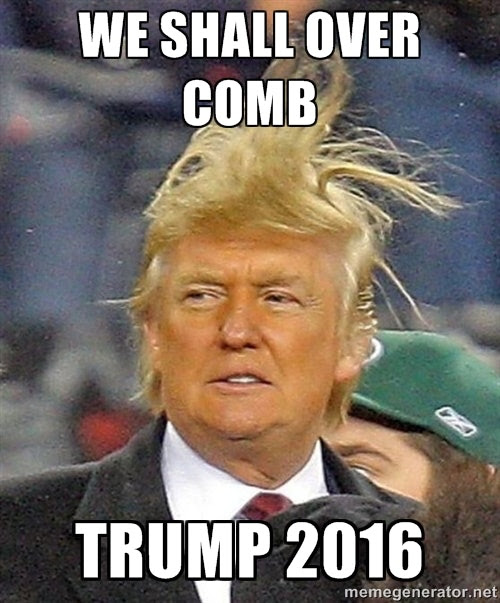 I have listened to more than a few people tell me they want to vote for Donald Trump. I doubt they will get the chance, The choice will be Hillary or Jeb, that is, the illusion of choice I mean. Bernie will become coopted and probably embrace Hillary. It's pretty obvious that hope and change never happened and it's not going to. If anyone actually believes in the American political system, they aren't paying attention. I thought Greece was a very good example of a place where Democracy was born, they voted in a referendum against austerity and their leaders turn around and give them more austerity.
Bernie Saunders had 11,000 people at his rally in Arizona yesterday, but all the reporting I read is, Trump putting down McCain, because Trump doesn't think he's a war hero, also Bill Cosby's deposition. He drugged women and raped them. I wish Hillary or Jeb would hand out Quaaludes before they rape us.
How is it that all we are offered are dynasties or clowns?
Because it's a joke.
The only thing keeping the political system from collapsing is Koch brothers money and the corrupt politicians thriving while doing nothing, cycling in and out of office to lobbies to corporations and back. The people in this country hate congress, they have turned their back on a political system that works for the 1% and the status quo. This is why people like Donald Trump or Bernie Saunders, But in the end I doubt that people will be voting for them. Will Bernie even get to debate anyone? Will Trump? He can't just fire his opponent.
At this point, Bernie Sanders seems to be getting a lot of traction, but so is Donald Trump, I guess this is a good example of this country being a nation of extremes. I can't imagine what the world must think of this country with a blowhard like Donald Trump as a Republican front man, I doubt that either Trump or Bernie will be on any ballot in 2016.
Posted by Patricia at 12:48 PM 4 comments:

Only in America could you have an assclown like Donald Trump stating the obvious, "This country's  bankrupt" thanks for that. He should know, he's filed for bankruptcy four times. He  had all of 200 people show up in New Hampshire to see him, that's really big news. Bernie Sanders (I-V) had almost 10,000 show up in Wisconsin, that's pretty telling.
After the "hope and change" of Obama, it's going to be a hard sell for Bernie, but a harder one for Hillary. No one wants a Clinton or for that matter a Bush in the White House again. Recycling can be a good thing, but not in this case. Then again all these people seem to try to recycle themselves, like Chris Christie, the epic fail from New Jersey, was invited to a "sleepover" at Mitt Romney's house. There probably isn't a S'more left in Massachusetts. Please, spare us. There's no need for Christie as a candidate, ask the people of New Jersey what we think of him. All it seems to be is a big SuperPAC money grab for all these politicians, there's also confusion over whether Bernie has one or not.
It's very expensive here in the "land of the free" to run for office or just run your household. People like Donald Trump don't have to worry about that, he always lands on his feet and is able to burn his way through another fortune. Average Americans don't have that luxury and we aren't interested in a TV celebrity who thinks he can run a country. It's a joke. Now that all the fireworks are over and the dust has settled, what the hell are we really celebrating? How many of these candidates are owned by corporations? I'm guessing that this election is going to be another "lesser evil' election.
Posted by Patricia at 12:42 PM No comments: