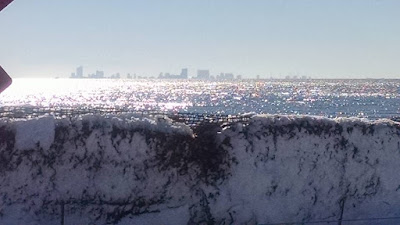 I live across the bay from Atlantic City. We got hit pretty hard with the blizzard, as you can see by the snow. The sunlight on the water was dazzling, When I was looking at that skyline I sat and wondered,
four casinos have closed in the last 2 years. Throwing so many people out of work and the rumors of bankruptcy of the town my grandparents met in, seems surreal.
There were people, hired as emergency management consultants for Atlantic City, the same people who designed the Detroit bankruptcy. Governor Rick Snyder chose and Governor Chris Christie decided to go with them too. Chris Christie also campaigned for Governor Rick Snyder, helping him get re-elected.
Mr. Orr has since gone on to Washington, after issuing a report saying that Atlantic City needs to make over $130 million in budget cuts. There was a meeting the night before the blizzard hit in A.C, the mayor threatened to file for bankruptcy. Everyone knows, no such thing will happen, not until Christie's presidential run is over. He will not do a thing about Atlantic City, it's not in his interests. But what has me worried is there could be a takeover, by the state emergency managers, like in Flint, Michigan. This is what Mr. Sweeney wants. Whatever either of these politicians want, I wonder what will happen to Atlantic City? If Flint, Michigan is any example, then the citizens of Atlantic City could very well be in trouble. Anyone who knows about Atlantic City, knows about the poverty there. Much like the poverty in Detroit or Flint. The emergency managers in Flint imposed a lot of cost cutting, in order to get cheaper water, well we all know what happened. Now the people of Flint will be living with the consequences of choices that were made for them. New Jersey and Atlantic City are no strangers to bad water;

Maybe Atlantic City has been able to stave off bankruptcy so far and probably will be able to for as long as Christie is running all over the U.S. and out of Jersey, dreaming of being President, we can all breathe a sigh of relief. However, something ugly is on the horizon, that dirty snow will melt away, but I am sure there will be some dirty deeds done. 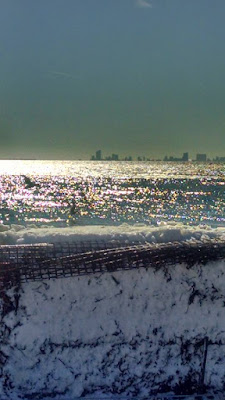 This New Year started on a very somber note. David Bowie and now Alan Rickman died. Shapeshifters both of them, different and alike. Amazing, wonderful artists. People are reeling, sad and bereft. We are left thinking the world has lost immense talent. The thing about artists and I think Bowie proved this, is you work until your dying day, you never run out of ideas, you are never bored or boring. They left the world a better place because they were here. We feel that loss. I didn't want to start this post without acknowledging the work they did and the influence they had on so many of us. With this in mind, I will get into the landscape of America and it's politics. It's going to take a lot of creativity to get us out of the mess that we're in.
I know one thing that really disturbed me when I started on this blogging journey, was that no matter how I voted or how much research I did or the people I talked to, nothing made much sense. I always came away wondering why the people I voted for never made government better, my life never improved after I pressed those buttons in the voting booth. One of the hardest things for me to accept was this;
The Deep State.
I could never wrap my head around the fact that the Pentagon was never audited, that we spent so much money on the military and wars, wars that we don't even win, failure after failure we continue to waste precious lives and our entire economy to enrich others and still we continue to vote thinking something will change and it never does.
Now, there are a lot of people still hoping that Bernie Saunders will make a difference. I hope they are right, but I doubt it. Our government was highjacked a long time ago. We have been lied to and we have been deceived.
It makes me really angry.
One thing I know is that since the "Great Recession" I have watched so many of my friends and neighbors, coworkers suffer. They work harder and longer. They pay more for healthcare and higher copays trying to stay healthy. They scrimp and save but they can't get ahead. I see more empty houses, not less. I see people without jobs, living with their grandparents, doubled up. I live in the epicenter of a heroin crises, what I have been told is that things are getting better, but the message doesn't seem to have taken hold.
What I see is ongoing contraction, not expansion. Whatever the mainstream media reports, isn't real. Which is why I no longer have a TV. There's no way I am going to pay to be lied to. I can get that for free.
If any of you have been watching these insane political debates and not come away shaking your heads at the nonsense of Donald Trump or Hillary Clinton, as if they are going to make any Americans lives better when they vote for them, I have no understanding of how that equation makes any sense. Yet, I have spoken to many people who are all in with Donald Trump. He IS a corporation, since our government is run by corporations, what could be better?
What we need is a change agent. What I liked about David Bowie was how he could turn everything on it's head, he made androgyny cool, he was constantly reinventing himself. His music kept changing and evolving.
What we need now is to reinvent our political system and turn into a system that works for the people. Our government is broken. It relies on the status quo. It's not going to change, no matter how you vote. We need to stop relying on these weird "values" that leaves everyone behind, while the few get ahead. What we need is to utilize our own creativity. People understand that there is something very wrong going on, they are slowly waking up. Change will happen, What we need is a change agent. We have that power. We can change this.