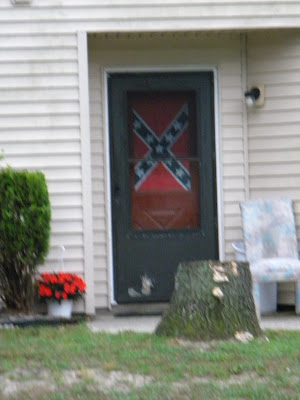 I wrote about my old neighbor before. How do you like his door? That flag isn't there anymore and neither is he. That doesn't mean there aren't more like him, with Confederate flags on their cars or hanging like curtains in their bedroom windows. I live in New Jersey, that doesn't seem to matter to these people, they like to let their freak flag fly. It's disgusting but completely acceptable. It's weird to me to live above the Mason-Dixon line and see so many confederate flags.
I am pretty sure they know that flag is a symbol, and it isn't a good one.
When nine people die in a mass murder, with evidence left behind that the person responsible liked to wave the Confederate flag around and the same flag is waving next to the states capitol, you don't need any more evidence to know the stubborn worship of that flag and what it stands for is ignorant and insensitive. I don't care if Uncle Jeb was a damn general in the Confederate army. He fought on the wrong side, get over it.
That's the problem right there. The war is still going on in their minds. If you look at the amount of police shootings of unarmed African-American people, it sure looks like they might be onto something.
The "just a good ole' boy" mantra, sung by Waylon Jennings, describes the experience southern white law breakers have, never mind any mention of the problems black people everywhere in the U.S. have just trying to survive an encounter with the police.
The Confederate flag is in peoples living rooms and in movie theaters. It's like Dixieland is La La Land, completely devoid of the reality that; "It is no accident that Confederate symbols have been the mainstay of white supremacist organizations, from the Ku Klux Klan to the skinheads. They did not appropriate the Confederate battle flag simply because it was pretty."
and "The Confederate flag, we are told, represents heritage, not hate. But why should we celebrate a heritage grounded in hate, a heritage whose self-avowed reason for existence was the exploitation and debasement of a sizeable segment of its population?*
You can't separate the flag from the hate, however, everyone seems to turn a blind eye to the real meaning of that flag and the gun problem we have in this bipolar country. Everything is spin. Like Rick Perry's accidental accident comment.
I doubt anything will happen when it comes to Confederate flags or guns. There's just too many of them and too few people with the will or just plain common sense to change. So we are stuck with the reality that more people will die in schools and now churches or at the hands of  out of control police. America, home of the fearful and the free to fire away.
*Flags of the Confederate States of America - Wikipedia, the free encyclopedia

There's a lot of empty houses I see on my drive to and from work. I see them in my neighborhood too, when I go for my work out run. There are 5 on just one street. It doesn't look like a recovery to me. It's not unusual to see these lonely houses with no people in them, it's just taken for granted it's a foreclosure. I remember first noticing them probably around 2007, I said to my friend "somethings not right, this is like The Great Depression, when was the last time you saw empty houses"?
Fast forward to 2015, look what we've got, another Bush for President or another Clinton?  It should be comedy, but I think they are serious. They are the American dream, corrupt and well connected, they brought us war and The Great Recession, since Clinton unraveled Glass-Steagle. People are supposed to just keep voting for the same tired retrocycled versions of political whores who don't give a damn about the empty houses or the crap jobs that pay minimum wage, if you can get one.
What I'm getting at is things weren't always this way. It seems we lack any sort of problem solving skills and no one seems to want to call a spade a spade, because it doesn't have to be this way. Empty house ghettos don't have to exist, neither does a random minimum wage, that used to be reserved for high school fast food workers, now forced on adults raising families, supplemented with food stamps. I see a lot of resentment and anger in my co-workers, most of whom live with family members because they can't afford to live on their own. The friends I have that live in McMansions are struggling too, it looks like they are better off, but their debt load says different, the pressure cooker of this broken economy is being felt by so many, opportunities continue to dry up, the free market is open to some, but not all, it's free to the connected and  the nepotistic.
America doesn't look like America anymore. I often wonder what country I am living in? I think the American dream has been outsourced and we've been left to bootstrap it on up, but to where?
Meanwhile, militarized police shoot unarmed fleeing people and no one bothers to hold anyone responsible or keep any statistics that may show that cops are out of control and are killing innocent people so it gets to the point where the last thing you do if trouble arrives at your doorstep is call the cops, because when they show up you now have two problems.
Probably no one I know will be looking at the G7 summit. We'll be ginning up another cold war over "Russian aggression" ignoring our obsession with the Middle East and the trillions we've spent on our own aggression. Obama is going to trot out the truly awful TTP deal, that won't do squat for the average struggling American, but will be awesome for multinational corporations, of course.
Here at home congress finally did something, of course it had everything to do with them and their cash cow, NSA, the spying will continue with the Freedom Act.
Americans are the only people in the developed world without a single payer heathcare system. We have a war on drugs that costs billions, while other developed countries have no such thing. Addicts are treated with compassion, not as income streams for corporate incarceration. Most people know something is wrong, but they don't have time to do the research it takes to figure out that you've been had and the country you used to know has been stolen by banks and corporations who own the government. I guess we're all supposed to get used to this slide into oblivion, where you and now your kids, all struggle, because the controls on the citizenry will clamp down on rebellion, unless you have the means to leave and live somewhere else, trouble is, I doubt anyone wants us.